A door closer is a mechanical device that closes a door, in general after someone opens it, or after it was automatically opened. Choosing a door closer can involve the consideration of a variety of criteria. In addition to the closer’s performance in fire situations, other criteria may include resistance to opening forces (for use by disabled or infirm), control over the rate of closing, safety, durability, risk of vandalism, and aesthetics.

There are four styles of interior door-closer: 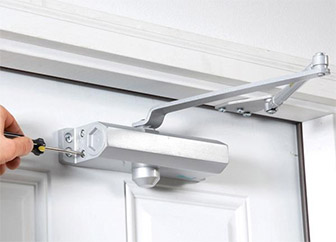 Another type of door closer, a surface mounted one, is attached to the door frame behind the door (where the hinges are) next to the middle hinge. The “arm” rests against the door, and a spring that is bent by the user opening the door closes the door by retracting to its proper shape.

There is also the storm door and screen door variation of the door closer: As the name implies, these piston shaped closers are used on storm, security, and screen doors which give the home an extra line of defense against weather, intruders, and insects. Whereas interior closers typically use hydraulics, storm door closers are more typically pneumatic, using air and springs to close the door. Storm Door closers generally have a small metal washer on the rod that is used to lock the closer in the open position when moving stuff in or out, but more recent models such as the Touch ‘n Hold door closer have a button to actuate the hold open feature to make this process easier.

Finally, there is the concealed, jamb-mounted door closer, which fits in morticed recesses in the door and door frame and is totally concealed when the door is closed. These are available in controlled and uncontrolled versions, selected according to the application for which they are intended.

An automatic door closer (more often called a “door opener”) opens the door itself, typically under the control of a push button, motion detector or other device, and then closes it as well, typically employing a motion or proximity detector to determine when it is safe to close the door.

Closers often feature dampers that offer control over the closing force and speed. Such dampers are usually hydraulic or pneumatic dashpots.

Door closers are most commonly installed on fire doors, which need to be closed in case of fire, to help prevent the spread of fire and smoke. In most countries, their performance will be governed by national standards.

Call Guardian Angel Locksmith for more information regarding your security needs and we’ll get right to work!